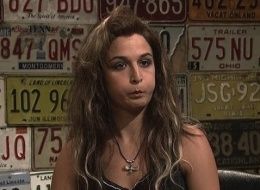 Rough first day on the job for new SNL cast member Jenny Slate. She dropped the f-bomb in the middle of her skit with Kristen Wiig. The video is up at the Huffington Post(for as long as it takes NBC to order them to take it down).

Judging by the uproar over Janet exposing her nipple, this should keep the FCC busy for a couple of years. Personally, I could care less, I’m just pissed Lorne Michaels fired a talent like Michaela Watkins for her.