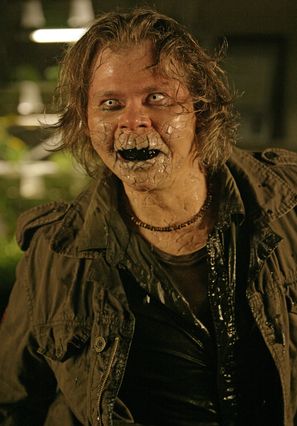 So that disturbing image is from last week’s Doctor Who: The Waters of Mars. Did you watch it? What did you think? Other than giving me nightmares about drinking water for the rest of my life, I finally got to see the darkest side of Doctor Who that we first saw at the end of  “The Family of Blood” episode:

Tonight’s episode begins the two part goodbye to David Tennant as Doctor Who. Still a little bitter about that. He’s gone on to greener pastures…or a sure to be cancelled in a couple of weeks series in America. I’m not being mean I swear, you just name me the last series Jerry O’Connell was on that lasted more than a month. Go ahead. Think about it. I’ll give you a minute…see? You know I’m right.

Here are a few links about tonight’s episode:

SciFi Wire talks about David Tennant’s exit…warning there are spoilers.

The Boston Herald talks to executive producer, Julie Gardner, who is also exiting the show.

The Star-Ledger talks to David Tennant about filming his last scene.